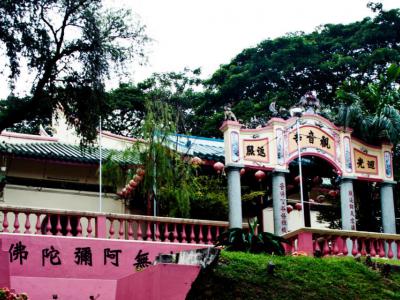 Built in the 19th century by early Chinese and Cantonese settlers, the Kuan Yin Temple is the first temple to be constructed in Georgetown, Penang. Originally called the Kong Hock Keong temple or the Cantonese-Hokkien Temple, the Temple was the hub for not only religious functions but also social gathering and merriment.

The Temple was built in honor of Kuan Yin, the Goddess of Mercy. With thousand eyes and a thousand hands, she is said to keep a close eye on all her devotees and worshipers. As legend has it, Kuan Yin was a devout Buddhist who was on her way to Nirvana, or salvation. However, Kuan Yin chose to stay back on earth and help her fellowmen and others who were striving for Nirvana. Hence, her great sacrifice and her humble soul made her the patron of the immigrants who had stepped into foreign land.

The Temple also honors Ma Chor Poh, the patron saint of the seafarers. Almost every Chinatown across the globe has Ma Chor Poh’s statue in their temple. Ma Chor Poh is greatly respected and honored by most Chinese who have settled elsewhere. This being mainly due to the fact that they travel terrible voyages by sea to foriegn land for better prospects.
Image by Kevin Poh on Flickr under Creative Commons License.