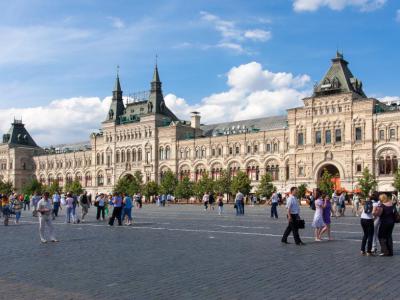 Overlooking Red Square, the famous shopping center, known as GUM, has been in place since 1893. The emporium was built by architect Alexander Pomerantsev and engineer Vladimir Shukhov, and was initially called the Upper Trading Rows. The current abbreviation “GUM” emerged after the Revolution of 1917 and first stood for Gosuderstvenny Universalny Magazin (State Department Store). Later, following the collapse of the Soviet Union and privatization, it was changed to Glavnyi Universalny Magazin (Main Universal Store).

Under Joseph Stalin, GUM served as an office building. It resumed being a shopping mall only after his death in 1953. During the Soviet era it was mostly all queues, as people lined up for the hard-to-get items amid the nationwide deficit of consumer goods. Unlike other stores, GUM never suffered from shortages of inventory. Moreover, its upper floor housed the secret Section 200 which served exclusively the highest ranking members of the PolitBureau, the Communist Party and other Soviet elite.

In the 1990s, the mall was privatized and changed several hands. Today GUM is famed for its exclusive boutiques carrying some of the top international labels money can buy. Still, GUM is more than just a luxury shopping venue.

Many cultural and artistic events take place here on a regular basis. Within the mall there are several notable eateries, such as Café Festivalnoe, Beluga Caviar Bar, Stolovaya № 57 and № 1, to mention but a few well worth visiting. Also, in winter there is a grand skating rink outside GUM where some of the top Russian figure skaters can be spotted alongside regular folk.

Why You Should Visit:
Huge number of boutiques, including many high-end, plus eateries serving some of the best meals near Red Square.
Architecturally mesmerizing, with the glass ceiling being star of the show.
Particularly worth visiting at night, when it's lit up.

Tip:
Try lining up for the special & very popular ice cream at kiosks to enrich the experience. Enjoying ice cream whilst walking under the glass arcade is quite a treat.
Also, take a moment (and some cash) to explore the onsite luxury toilet.
Image by Sergey Ashmarin on Wikimedia under Creative Commons License.