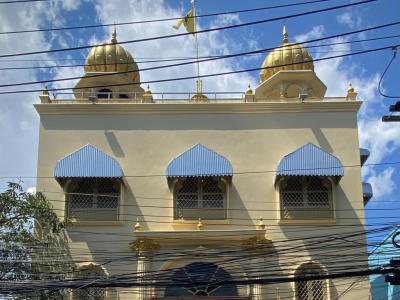 Phuket is a brilliant combination of scenic beauty, history and diverse cultures, where one can visit various temples and shrines. The temple of the Sikhs, called the Gurdwara, literally means “gate to the Guru”. Gurdwaras were built in Thailand for the Sikh community that came into the country in 1939 for purposes of mining and construction. The community further grew after the Second World War as Sikhs were part of the Indian National Army (INA) and guarded British interests in Thailand. In the post war era, many Sikhs immigrated to Thailand to fuel the demand for the hotel industry. The rising numbers of Sikhs required new Gurdwaras to be built and the old ones to be renovated and expanded. The Sikh Temple in Phuket was last renovated in 2001.

The Temple is open to one and all irrespective of their religion, caste or creed. However, it is mandatory for all to remove their footwear and cover their heads when inside the Temple. The main hall houses the Guru Granth Sahib, the holy book of the Sikhs and is used for daily prayers. Prayers include singing of the hymns, reading and explaining the hymns and are ended with the distribution of ‘Prasad’. The ‘Pangat’ or ‘Guru ka Langar’ is a community kitchen which provides food to all devotees and visitors. This ritual is a great leveler and promotes social equality. Located on Suthat Road, the Gurdwara offers peace and calm to all its visitors.
Image by Nene on Flickr under Creative Commons License.