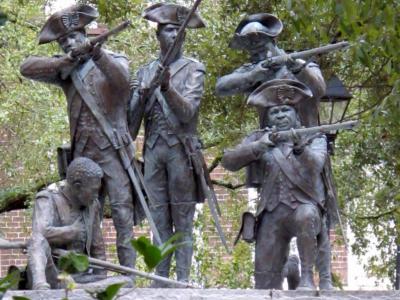 A key part of the forces that fought in this attack were Haitians of African descent. After the unsuccessful attack was concluded, many of these soldiers were sent off to fight other battles. Not many returned, and those who did often didn't see their homes until years later. The soldiers who returned became instrumental in winning Haiti's independence.

Stories of the contribution of these Haitian soldiers to American independence isn't encountered very frequently in history books, but that doesn't make it any less significant. The unit of Haitian soldiers who fought in the American Revolution was “Les Chasseurs Volontaires de Saint Domingue” serving under Charles Henri d'Estaing, and was the largest unit of soldiers of African descent. All of the members were free men who volunteered to fight the British.

The Haitian Memorial Monument was sculpted by James Mastin. One of the figures, a drummer, is a sculpt of Henri Christophe. He was a key figure in the fight for Haitian independence, serving as commander of the Haitian army. After the war was won, he became the King of the newly-independent Haiti.
Image by john on Flickr under Creative Commons License.