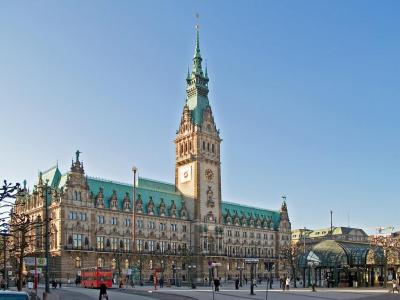 The new city hall was built to show Hamburg's immense wealth and prosperity. It is the seat of Hamburg's parliament, mayor, and senate. Heads of State such as Emperor Haile Salassie I, Mohammed Reza Pahlavi, and Queen Elizabeth II have been received in this impressive building.

The Imperial Hall has a painted ceiling that depicts German merchant shipping, while pressed leather wall coverings decorate the walls. A phoenix representing Hamburg's recovery after the 1842 fire stands above the fireplace in Phoenix Hall.

The Senate chamber features a glass roof that fills the chamber with light and represents ancient open-air council meetings.

In the Grand Ballroom, visitors will find enormous paintings showing Hamburg's history from 800 to 1900. The impressive chandeliers have 278 lights each.

Hamburg City Hall's lobby is open to the public and is used for exhibitions and concerts. The balcony features a mosaic featuring the city's coat of arms and motto and depicts Hamburg's patron goddess Hammonia.

The courtyard features a fountain representing Hygieia, the Greek goddess of health and hygiene.
Image Courtesy of Wikimedia and Heidas.