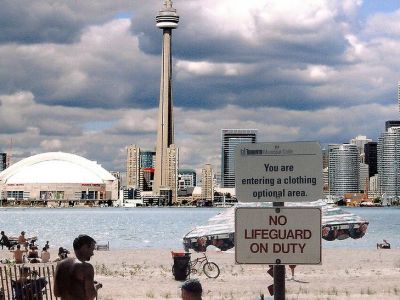 If you are eager to sunbathe or otherwise spend hours relaxing on a beach, then Hanlan's Point Beach is definitely the place to go. This beach is a public property situated on Hanlan's Point in the Toronto Islands near the city, on the shore of Lake Ontario.

A kilometre-long part of the beach was officially recognized by the municipal authorities in 2002 as “clothing optional”, thus instating legal status of what had been a traditional site for nude sunbathing for decades before. In 1999, Toronto City Council approved a one year pilot project for a nude beach at Hanlan's Point following a proposal by naturist organization and Councillor Kyle Rae. In 2000, the council extended the project for another two years. Finally, in 2002, the clothing-optional beach was made permanent.

The Toronto City Council decision was met with strong opposition from conservative councilors. Previously an infrequent target of police crackdowns for nude sunbathing, the place, now endowed with the official status, has generated a distinct increase in ferry traffic and appears to be a profitable component of public- and private-sector advertising campaigns, since it draws visitors to Toronto.

Police and park officials now work in partnership with the beach-goers to maintain the friendly atmosphere. The effective beach season starts in late May and ends in late September, while actual swimming off the beach is possible only within this period.
Image by Robert Stirrett on Wikimedia under Creative Commons License.
Sight description based on wikipedia