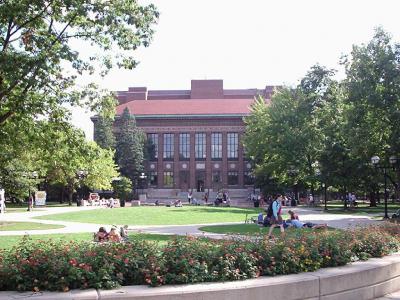 The Harlan Hatcher Graduate Library is the largest and most historical of the libraries on the University of Michigan campus. It is the primary research library for students of humanities and social sciences. The library contains over 3.5 million volumes, more than 10,000 periodicals and culturally important maps, manuscripts and government documents.

The building itself was completed in 1920. It was built on the grounds of the old library, which was incorporated into what was then called the General Library. The building was designed by Albert Kahn who used the Harvard campus as his inspiration.

The first floor entrance, which is now called the North Lobby, was decorated in Pompeian medallions designed by Ulysses Ricci. The symbols incorporated into the motifs include the staff of Aesclepius, a pegasus and a Greek mask. These figures are said to symbolize healing, poetry, music and drama.

Visitors to the University of Michigan campus must make an appointment to enter the stacks of the Harlan Hatcher Graduate Library. Appointments may be made Monday through Friday from 9 AM to 5 PM.
Image Courtesy of Wikimedia and Pentawing.