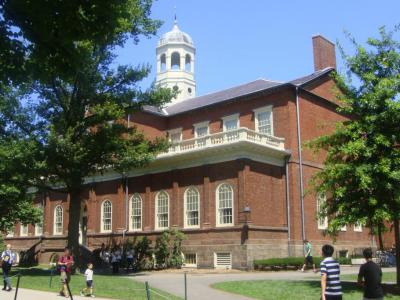 Sir Francis Bernard, the colonial governor at the time, designed the building. Thomas Dawes, who also built Hollis Hall, was the master builder. John Hancock and Thomas Hollis donated to the reconstruction, allowing the university to build a more extensive library than before. Benjamin Franklin advised the university on replacement scientific instruments.

Harvard Hall was built to be a multi-purpose academic site, hosting a library, cafeteria, classrooms, and science labs. It was renovated in 1842, and a two-story porch was added. The building underwent another renovation in 1870.

More recently, another renovation began in 2019. The exterior was restored to its 1870 condition, with brick restoration and paint matching. The interior has been renovated to bring modern technology to the classrooms in this historic building.
Image by Mariordo on Wikimedia under Creative Commons License.