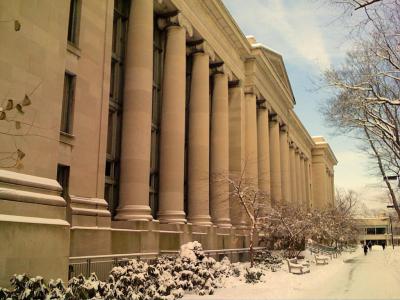 Austin Hall is Harvard Law School's oldest building, completed in 1883. It was designed by renowned architect Henry Richardson, who also designed Server Hall. It originally housed the entire law school. The Richardson Romanesque style features semi-turrets and intricate carvings. The stonework is laid out with light and red colors, creating a checkered effect. Ames Courtroom is located in Austin Hall; students argue moot cases here. The final case of each year is usually presided over by a Supreme Court Justice.

Gannet House was built in 1838. It houses the Harvard Law Review.