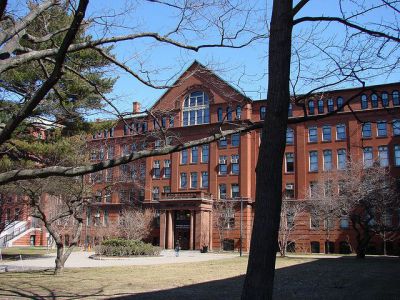 You will find the Harvard Museum of Natural History on the University Campus grounds and you really must visit this fine establishment which is divided into three distinct sections.

The first section is the Harvard University Herbaria, founded in 1842. It houses over five million specimens of botanical life-forms. If you’ve ever wondered what such-and-such plant is called, you can look it up in the International Plant Names Index, along with names of noted botanists, their publications and specimens. There is also a magnificent Ware Collection of glass models of plants – the glass flowers are particularly breath-taking.

In the second section you will find the Museum of Comparative Zoology, which is devoted to the evolution of animals and has a fossil collection of historical interest, including two pheasants owned by George Washington, a Mamo (a bird native to the Hawaiian Islands, now extinct) found by Captain Cook and a sand dollar (an extremely flat cousin of sea urchins) found by Charles Darwin.

The best part of the museum is the third section – the Mineralogical Museum, with its amazing collection of minerals, rocks, ores, gemstones and meteorites. The displays of amethyst clusters, moonstones, tiger’s eyes and aquamarines amongst other gemstones are staggering, as are the meteorite showcases with samples of the rarest objects from the universe you will ever see.

Why You Should Visit:
Old-school museum, well put together for its type. There's just WAY too much to be enjoyed, which is obviously a good problem to have.

Tip:
Don't miss the glass flowers – indistinguishable from the real things. You must see them before you die!
Keep in mind that with the same admission, one can also visit the Peabody Museum of Archaeology and Ethnology.