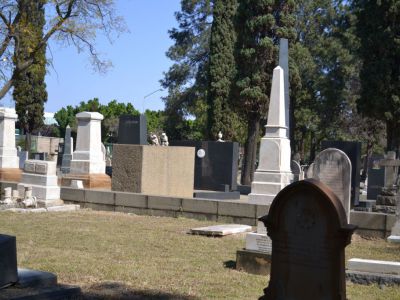 The Heroes' Acre (Die Helde Akker) is a section of Church Street Cemetery in Pretoria. It was established in 1867, and contains the graves of renowned citizens and public figures. It is the burial place of a number of historical figures including Andries Pretorius, Paul Kruger and Hendrik Verwoerd. Australian Boer War anti-hero Breaker Morant (executed by the British for war crimes during the Second Anglo-Boer War) is also buried here.

The first burials took place in 1867. In 1973, Tom Andrews (with the assistance of the Girl Guides) was the first surveyor of the cemetery. He documented all graves and later published it as a book called "Pioneer Sketches".

The cementery is located on the corner of Church Street and DF Malan Drive.The central part of the cemetery is known as The Heroes' Acre. The cemetery is a vast green field filled with tombstones of diverse shapes and styles which are organized in rows. As this is a Christian cemetery, the graves are oriented facing east. Trees and shrubbery gives the cemetery a calm feel. The silver crosses in The Heroes' Acre are significant and distinctive of the cemetery. The Heroes' Acre is listed as a heritage site.
Image by PHParsons on Wikimedia under Creative Commons License.
Sight description based on wikipedia

This sight is featured in a self-guided walking tour of Pretoria, South Africa within the mobile app "GPSmyCity: Walks in 1K+ Cities" which can be downloaded from iTunes App Store or Google Play. Please download the app to your mobile phone or tablet for travel directions for visiting this sight. The app turns your mobile device to a personal tour guide and it works offline, so no data plan is needed when traveling abroad.