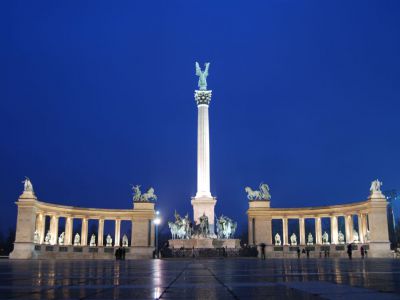 Heroes' Square is easy to get to, and unforgettable once you've seen it. Located in front of the City Park, at the end of Andrassy Avenue, the monument was built in 1896 to commemorate the millennial anniversary of the arrival of the people of Hungary to the Carpathian Basin. By design, it consists of two semi-circles, which have the symbols for War and Peace, Knowledge and Glory, and Wealth and Labor affixed. The place is decorated with the statues of famous kings, governors, and celebrated characters from Hungarian history, as well as little reliefs depicting the most pinnacle moment of their lives.

The centerpiece of the memorial is the 36-meter high statue of the Archangel Gabriel holding a crown in his right hand and the double cross of Christianity in the other. The base of the column is surrounded by seven equestrian statues of ferocious-looking warriors, which depict the Magyar chieftains of the Hungarian tribes, the most notable being Árpád, whose descendants started the Hungarian royal line.

In front of the Millennium, Column stands the Monument of National Heroes, a cenotaph also referred to as the Tomb of the Unknown Soldier, in tribute to Hungary's nameless heroes of war.

The sheer size of everything means one cannot fail to be impressed! Flanked by two important buildings – the Museum of Fine Arts on the left and the Palace of Art (Kunsthalle) on the right – this is, in fact, one of Budapest's most visited sights.

Tip:
You can easily combine your visit with a stroll to Vajdahunyad Castle, the peaceful park across the road, and the Széchenyi bath building.
Image by Paul Mannix on Wikimedia under Creative Commons License.