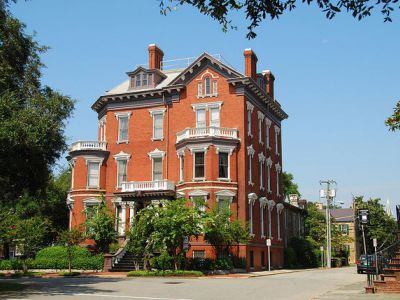 The Savannah Historic District is a large urban U.S. historic district that roughly corresponds to the city limits of Savannah, Georgia, prior to the American Civil War. The area was declared a National Historic Landmark District in 1966, and is one of the largest districts of its kind in the United States.

Each year, the Savannah Historic District attracts millions of visitors, who enjoy its eighteenth- and nineteenth-century architecture and green spaces. The district includes the birthplace of Juliette Gordon Low (founder of the Girl Scouts of the United States of America, see Juliette Gordon Low Historic District), the Telfair Academy of Arts and Sciences (one of the South's first public museums), the First African Baptist Church (the oldest African American Baptist congregation in the United States), Temple Mickve Israel (the third-oldest synagogue in America), the Central of Georgia Railway roundhouse complex (the oldest standing antebellum rail facility in America), the old Colonial Cemetery, Cathedral of St. John the Baptist, and Old Harbor Light.[4][5]