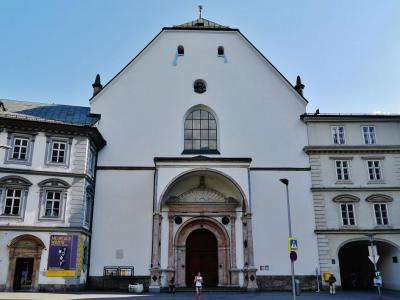 Holy Roman Emperor Maximilion I (1459-1519) had become obsessed with the reality of death. He carried his coffin with him in his travels. A ruler who had pursued fame and glory with gusto all his life now thought mostly of his tomb.

He was buried in the St George castle chapel in Vienna. His son, Charles V and his grandson, Ferdinand I, financed the tomb project.

There was a catch. There wasn't enough room in the St George castle chapel for Maximilion and the tomb. Something had to give. No problem. Ferdinand built a monastery and tomb in Innsbruck, over 300 miles away. Maximilion stayed in Vienna.

The Innsbruck building was named Court Church ("Hofkirche" in German). The Court Church next to the the Imperial Palace (Hofburg). The design of the church is by Andrea Crivelli of Trento. It follows the plan of a German "hall church."

It has three naves, both round and pointed arch windows and a hip roof. There is a blend of Renaissance designs and German Gothic styles. The portal is Renaissance, carved by Hieronymus de Longhi and Anton de Bol.

Inside there are galleries and thin red marble colonettes with white capitals. The vault is in 17th century Baroque style. The high altar, designed by court architect Nikolas Pacassi, dates from 1755. There are statues of Francis of Assisi and Teresa of Avila by Balthasar Moll and the world famous Renaissance organ is by Jorg Ebert.

The Siver Chapel (a side chapel) has an altar to Mary made from silver, three elephant tusks and 300 kilos of ebony. The chapel holds the tombs of Ferdinand II and his spouse, Philippine Welser.

In the center of the nave is the black marble Mannerist cenotaph of Emperor Maximilion. It was completed in 1572. Final touches of the kneeling Maximilion, the four virtues and the iron grille were done by 1584.

Twenty-four bas-reliefs depict the events of Maximilion's life. There are 28 bronze statues of Habsburg emperors and ancestors. Andreas Hofer, the national hero of Tyrol, is also buried in the church.
Image Courtesy of Wikimedia and Zairon.