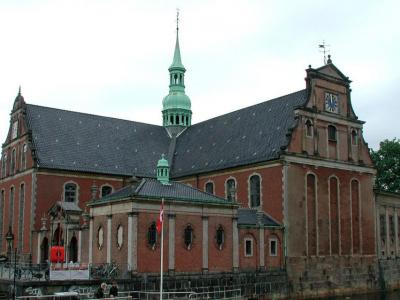 Holmens Kirke is located close to the harbour in Copenhagen. This 17th century Renaissance church was originally constructed by Peter de Duncker, a Dutch builder in 1563 to serve as an anchor forge.

In 1619, under the orders of King Christian IV, the forge was converted to a navy church. In 1870s, the church was renovated. As a part of the renovation, a sepulchral chapel was designed and constructed to the right of Holmens Kirke by Johan Conrad Ernst, the court architect.

Since its extension in 1640, the church has been restored and painted a few times. The walls were built in red cement in 1872 and the interior was decorated in baroque style popular at that time. The galleries, running around the church, were built during the 1872 restoration.

You will find a votive ship hanging in the nave. Inspired by a drawing of Admiral Niels Juel’s 1697 flagship, the model of this ship was made in 1904. Votive ships are a common feature in most of the Danish churches.

Abel Schroder built the altar and pulpit in 1661. You will find biblical scenes with apostles on either side on the pulpit. Flanked by evangelists, scenes of the last supper, resurrection and last judgment are painted on the altarpiece.
Image by Ib Rasmussen on Wikimedia under Creative Commons License.