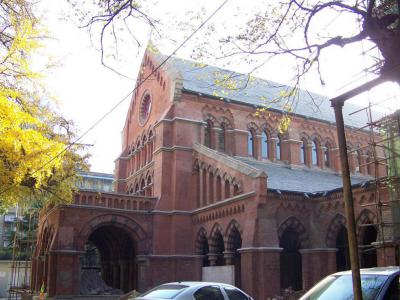 The Holy Trinity Cathedral was the principal place of worship for British expatriates who flocked to Shanghai after victory in the Opium wars. Recently, extensive repairs were undertaken and the interiors have been restored to its former grandeur.

Construction of the Holy Trinity Church was started in 1866 and completed in 1869. Sir George Gilbert Scott, the famous Neo Gothic architect formulated the design and the construction was supervised by his student William Kidner. He changed the original plans to reduce the cost of construction and to seat an increasing congregation. The organ installed in 1914, was at the time, the biggest in Asia. There was a school for boys attached to the church where the author J.G.Ballard was a student. He recounts his childhood days in Shanghai and describes the cathedral in the novel, Empire of the Sun. The Shanghai Scout movement of Baden Powell began in the cathedral building.

The building was damaged during the Cultural Revolution and the spire destroyed. It was converted into a cinema. A stage was erected and the brickwork painted over. In 2006, the building was returned to the church. With funds received from the UK and America, the Chinese architectural design company Zhang Ming restored the interiors and installed new carved teak pews.
Image by @grace on Flickr under Creative Commons License.