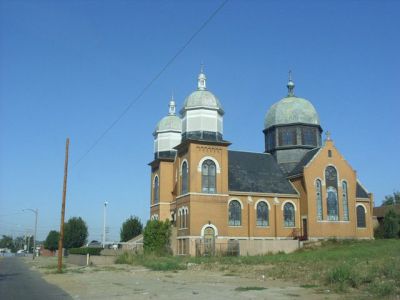 Construction of the Holy Trinity Ukrainian Catholic Church was officially announced in 1911, its cornerstone blessed by Bishop Ortynsky later that year. Completed in 1913, its design features Ukrainian Baroque elements, especially notable in the domes and turrets. It is home to a beautiful marble altar with a frescoed replica of Our Lord’s Last Supper, large stained glass windows depicting the four Evangelists, and an impressive tower with three bells, all of which were added in 1914.
Image by dougtone on Flickr under Creative Commons License.