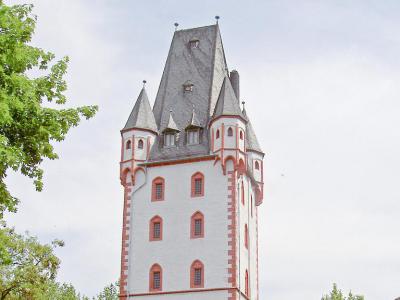 The Holzturm (Wood Tower) is a medieval tower in Mainz. Together with the Iron Tower and the Alexander Tower, this is one of three remaining towers that once formed part of the city walls.

Its current Gothic appearance dates from the first half of the 15th century. The tower is so named because of the wood that, back in the Middle Ages, was rafted down the Rhine river from South Germany and piled on the riverbank in front of the gate. This fact and the wood market once held outside the gate gave the tower its name.

Like the Iron Tower, the Wood Tower used to serve as a watchtower, gate-tower and later, from the late medieval to early modern periods, as a gaol. Among those imprisoned here, in 1793, were the so-called 'Clubists', members of the Jacobin club who organized the Republic of Mainz after the Prussian reconquest of the city (previously occupied by the French). Its most prominent inmates, however, were Johannes Bückler, known as 'Schinderhannes', and the members of his gang, who spent here more than 15 months prior to being guillotined, in 1803.

Also, similarly to the Iron Tower, the six-storey structure has walls of crushed stone articulated by square quoins and two dividing cornices, and is surmounted by a hipped roof, in this case very steep. In contrast to the Iron Tower, however, the Wood Tower is much more slenderly proportioned, which is typical of the Gothic-style 'verticality'.

The gate has a pointed archway, and a ribbed vault for the ceiling. The tall windows also have typically Gothic pointed-arch frames. Busts of couples – a burgher and his wife, and a king and a queen – appear above the two windows on the first floor, on the city side of the tower.

The building was badly damaged during World War II and was accurately reconstructed in 1961 for the 2000th anniversary of the city. It currently houses various organizations and clubs.
Image Courtesy of Wikimedia and Heidas.
Sight description based on Wikipedia.