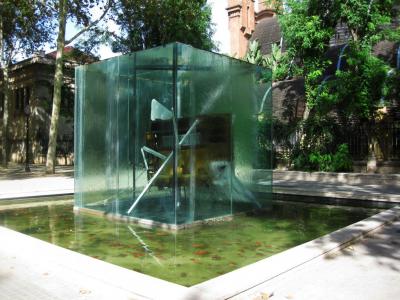 The street they named for Picasso – though not particularly fashionable or glamourous – is in the area the painter knew best, close to his family's apartments, the art school where his father taught drawing (and where he studied for a short while), the studios he had as an emerging painter, and the bars he frequented.

Here also, on the edge of the Parc de la Ciutadella, stands the monument to him commissioned by Barcelona’s city council in 1981 and made by Catalan artist Antoni Tapies. Filled with mystery, a glass box in a pool of water contains an uncompromising assemblage of modernist furniture reminiscent of Picasso's era. Resisting meaning, or easy interpretation, it is an exciting piece of public sculpture that stands for the strong connection between the artist and the city.

White sheets inside the cube have quotations by Picasso written on them in Catalan, notably the following;
“a painting is not intended to decorate a drawing room but is instead a weapon of attack and defence against the enemy”
Image Courtesy of Wikimedia and Slaven Kosanovic.