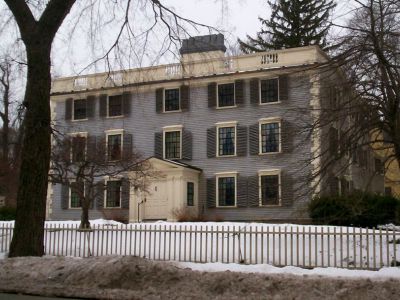 The Hooper-Lee-Nichols House is a historic Colonial American house in Cambridge, Massachusetts, and is the second-oldest house in the city. Now headquarters for the Cambridge Historical Society, the house was originally built in 1685 by Dr. Richard Hooper as a typical "first-period" farmhouse, although its ceilings were plastered, which was unusual for a modest dwelling. When Hooper died in 1691, his wife took in boarders and the property eventually started to fall into disrepair.

She in turn died in 1701, and the house continued its decline until 1717, when it was inherited by Hooper's son, Dr. Henry Hooper, who added a lean-to and rebuilt the chimney with cooking ovens. In 1733, he sold the house to Cornelius Waldo, who added a third story and wooden quoins at the corners. Waldo also installed larger windows. The result was a house that looked thoroughly Georgian. The property is open for tours on Tuesdays and Thursdays at 2 and 3 pm.
Image by Midnightdreary on Wikimedia under Creative Commons License.
Sight description based on wikipedia