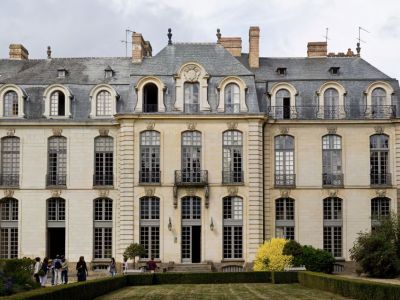 The Hôtel de Blossac is an 18th century hôtel particulier in the historic center of Rennes, Brittany. Made of two main wings, the building was built in 1728, after the 1720 Rennes city fire, supposedly on a drawing by Jacques Gabriel. It has a unique classical architecture in Brittany, including its size, the size of its frame, the assembly of several architectural buildings and grand staircase.

Protected under the historic monuments in 1947, it undergoes a complete exterior restoration spread over three decades while the apartments give way to office. It is wholly owned by the state since 1982 and houses, in rooms refurbished and restored, the Direction régionale des affaires culturelles (DRAC, Regional Directorate of Cultural Affairs of Brittany) and in service quarters, the service territorial de l’architecture et du patrimoine (Territorial Service of architecture and heritage of Ille-et-Vilaine).

Hôtel de Blossac is divided into two parts: the side yard on the north and the garden side yard on the south. The side garden has a perron and an elaborate facade, while the courtyard side is more austere, but contains, in the south, the grand staircase. Facing the courtyard are the old stables, with perpendicular, the gallery overlooking the garden. As the hotel is a public building, it is possible, during office hours, visiting the external (courtyard and garden) and the staircase, including access to the documentation library. Those outside are usually open to the European Heritage Days.
Image by Julie Anne Workman on Wikimedia under Creative Commons License.
Sight description based on wikipedia