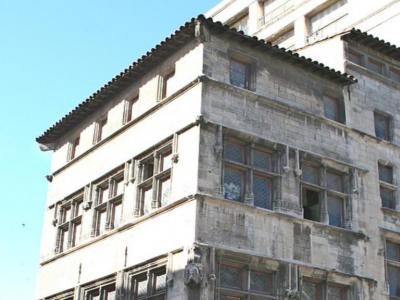 Constructed around 1535, the Hotel Cabre is thought to be the oldest building in Marseille still in use today. It was constructed in a strange mixture of gothic and renaissance style by Louis Cabre, Second Consul of Marseille in 1544.

Also known as la maison de l'Echevinde Cabre, the hotel is situated at the angle of Bonneterie Street and Grand Street in the 2nd arrondissement. The house passed several centuries with a minimum of damage. However, in the revolution, vandals destroyed the armories of flowers which adorned the facade.

In 1943, during the raid on Marseille, German forces almost all but destroyed some streets bordering the north bank of the Old Port. Some buildings of historical value were preserved, like the Diamond House and the Hotel Cabre.

On the front of the hotel are effigies of the owner and his wife along with amorous cherubim and a statue of Saint James, a reference to Jacques de Cabre, father to Louis Cabre.
Image Courtesy of Wikimedia and Robert Valette.