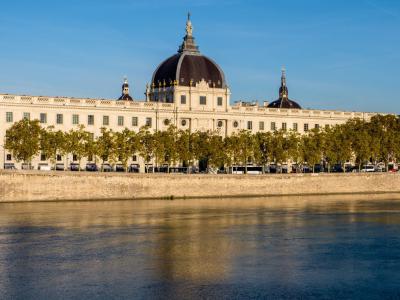 The opulent Hôtel-Dieu de Lyon is the former hospital on the bank of the Rhône in Lyon; it is one of the largest buildings of the Presqu’île peninsula.

Back in the year 1000, the Ordre des Frères Pontifes (Bridge-Building Brotherhood) established here a minimal care facility for ailing pilgrims. In 1184 it became a hospital, known as the Hopîtal du Pont du Rhône, run by nuns. Initially, it was quite small, with only a priory and a chapel.

The first qualified doctor appeared there in 1454. In 1478 the municipality bought the facility and enlarged it to 200 beds, simultaneously adding a new chapel and a cemetery. During the 15th century, it was enlarged again, with the chapel turned into wards. In 1622 the outbuildings were pulled down and replaced with a number of buildings in the form of a cross around a central dome. Soon, a new church was built, designed by Guillaume Ducellet, followed by yet another building for convalescents added in 1663.

In 1761, Jacques-Germain Soufflot built the Grand Dome for changing the air over the large wards down below. During the French Revolution, all the unqualified workers were dismissed and replaced with trained medical personnel.

The hospital was enlarged once again in the early 19th century. In 1896, the first radiology department in France, performing X-rays, was established. In 1923 an Oncology department was set up in the Grand Dome.

The institution continued operating as a CHU (Centre Hospitalier Universitaire) – a teaching hospital – until its closure in 2010. As of 2019 the complex has been converted into a luxury hotel and a shopping mall.
Image by alh1 on Flickr under Creative Commons License.