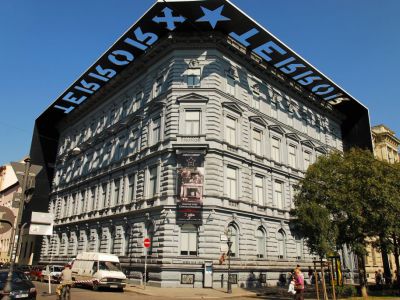 House of Terror, Budapest (must see)

A building that chilled hearts during much of the 20th century, the so-called House of Terror stands out against the more traditional buildings on Andrassy Avenue with its black passé partout, granite sidewalks, and blade-colored walls.

It is actually a museum proper, detailing some of the gruesome activities of the German occupation and what followed under the Russian-backed communist government. In like fashion, it is also a memorial to the many who died under the city's "double occupation" or were victims of torture and detention, providing some insight and understanding of the plight of the ordinary Hungarian folk.

The whole experience is atmospheric with music, lighting and video contributing to the ambiance. Most of the information in the museum is in the form of testimonial videos from survivors of the different regimes, coupled with original photos and newsreels/propaganda videos rather than objects (though there are a few around), so it is rather "good value" in terms of how much content one gets for the money. Moreover, each room has a box full of A4 papers in English and Hungarian with a background in what the room relates to (though not necessarily what visitors are looking at exactly).