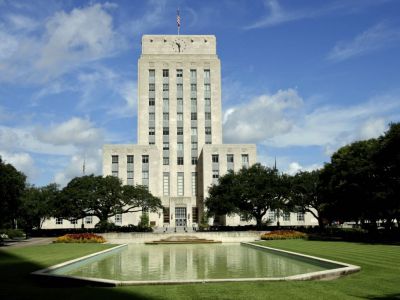 Houston's center of government oozes Texas with a fossilized limestone facing and multiple friezes depicting Texas themes. Flanked by Tranquility Park and the Houston Public Library, it stands in wonderful contrast to some of the newer metal-and-glass skyscrapers that now loom over it. The builders used aluminum at a time (1938-39) when it was still a fairly new material; appropriately, too, it was one of the first major downtown office buildings to have air-conditioning.

Politicians and bureaucrats spent 15 years haggling over the building's design. While, eventually, the exterior was done in a stripped classical style, inside the Hall was fitted with a private elevator for the mayor (which may still be in use), as well as private showers for each of the city council members. By contrast, the lobby floor is themed around the government's protective role; e.g., a sculpture above the doors depicts two men taming a horse, which is meant to symbolize a community coming together to tame the world around them. Elsewhere, such as in the grillwork above the main entrances, are medallions of "great lawgivers" from ancient times to the founding of America, including Thomas Jefferson, Charlemagne, Julius Caesar and Moses, as well as an outdated city seal that adorns the interior doorknobs.

Why You Should Visit:
Definitely worth a walk through, including the grassy grounds, the reflection pool, and the beautiful city council chambers.

Tip:
Be sure to walk the City Hall grounds in springtime, when the multicolored azaleas are blooming.