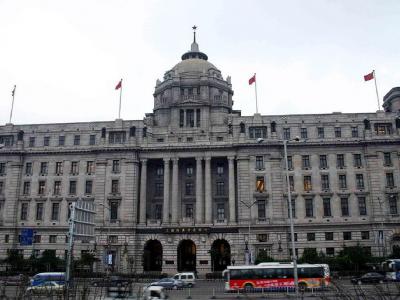 The HSBC Building at No:10, The Bund, Shanghai was at the time of its completion, the second largest building in the world after the Bank of Scotland Building in Edinburgh. It is now home to the Shanghai Pudong Development Bank.

The HSBC or Hong Kong and Shanghai Banking Corporation first occupied the ground floor of the Peace Hotel in Shanghai. As the business of the Bank grew the premises became too small for HSBC. They purchased a three storey building that stood at No:10 called the Foreign Club. The new elaborate structure was built between 1921 and 1923 and was the HSBC headquarters until 1955. During World War II, it was occupied by the Japanese Yokohama Specie Bank and later by the Shanghai Municipality.

The HSBC building was designed by the British, Palmer and Turner architects and surveyors in consultation with Chinese Feng Shui Masters. The structure had a neoclassical style with ornate interiors of marble and Monel. The entire building was fitted with air conditioning and heating equipment. It has a spectacular dome with 8 mosaic murals depicting the cities where the main branches of the HSBC bank were located. The Pudong Development Bank took over the building in 1997 and funded its restoration. The only changes made were the removal of the HSBC emblem which was replaced by that of the Pudong Development Bank.
Image by LosAngelesT on Wikimedia under Creative Commons License.