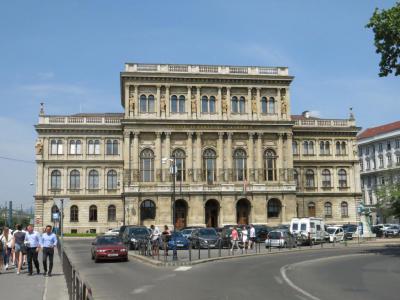 While not necessarily one of the top tourist sights in Budapest, the imposing, grand edifice of the Hungarian Academy of Sciences deserves attention, from an architectural standpoint, as the one replete with intricate details and set amid the area of outstanding beauty.

Inaugurated in 1865, the building features neo-Renaissance design, defiant to the Gothic style dominant in the European capitals of that period, which sparkled heated debate and asserted Hungary in the position of a rogue state reluctant to observe urban trends prevalent in the likes of Paris and St. Petersburg at that time.

Perhaps the most peculiar visual detail in this building is the carving on the side farthest from the Danube, lining Akadémia Street and depicting first members of the academy. The depiction itself doesn't look as scholarly as one might expect since all the first academy members there appear donning full military uniform with swords, including the forefather of the academy himself, Count István Széchenyi, who stood at its origins in 1825. Initially, the count subsidized the academy with proceeds from his own estate, and was later followed in that by other wealthy patrons seeking to promote arts and sciences in Hungary. The count's bronze statue now stands opposite the building on the stone base featuring four figures depicting the count's four main areas of interest, namely: Commerce (represented by Minerva, the deity of wisdom, civilization and war); Navigation (represented by Neptune, the god of sea and water); Industry (symbolized by Vulcan, the god of fire and volcanoes); and Agriculture (appearing in the form of Ceres, the goddess of fertility, crops and motherhood).

Over the course of nearly two centuries since, Hungary has benefited greatly from that effort producing a pleiad of inventors whose creations now are firmly imprinted in the engineering legacy of mankind, from ballpoint pen to holography to hydrogen bomb to the first automatic exposure camera to the noiseless match to the Rubik's cube.
Image by Filip Maljković on Wikimedia under Creative Commons License.