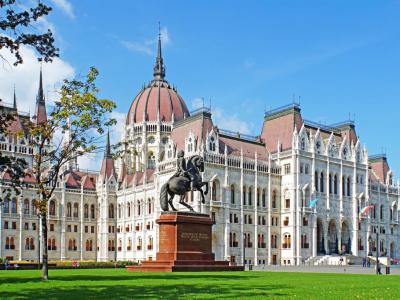 The seat of the Hungarian Parliament is a massive Neo-Gothic edifice resting on the eastern bank of the river Danube. This stately piece of architecture is by far the most recognizable landmark of Budapest, being the largest building in Hungary and one of the oldest of its kind in Europe.

Symbolizing the country’s newly-found political unity, it was built in 1896, just in time for the celebration of Hungary's millennial anniversary. The construction involved around 100,000 people and took 40 million bricks, 40 kilos of gold, and half a million precious stones and jewels used for decoration. The enormous structure contains about 700 rooms and a staggering 19 km of stairs and corridors, with overall 242 sculptures, both inside and outside, and 27 entrance gates!!!

One of the most prominent parts of the building is, undoubtedly, the central hall featuring the Hungarian Coronation Regalia, the precious artifacts including the Holy Crown of Hungary, the orb, the scepter, and a Renaissance-style sword.

Visitors are free to explore the interior on the short (45-minute) tours passing through the impressive ornamental staircases, the dome cupola where the Holy Crown is kept, and the House of Representatives. These tours are well worth taking and get filled rather quickly, so those willing to take one are advised to book online, at least two days in advance, as well as to bring along a valid ID.

Apart from its architecture, the parliament building also attracts visitors with the change of the guards ceremony that takes place there every afternoon. Also, when the sun sets and the illumination gets on, it becomes the highlight of the Budapest nightscape, largely resembling a colossal Christmas tree!

Opening Hours:
Daily: 8am–6pm (Apr-Oct); 8am–4pm (Nov-Mar)
Visits to the House of Parliament are restricted during weeks in which the National Assembly holds its plenary sittings.
On the first day of the plenary, the building will be accessible to visitors from 8am to 10am and the ticket office will be open until 11am.
Image by Dennis Jarvis on Flickr under Creative Commons License.