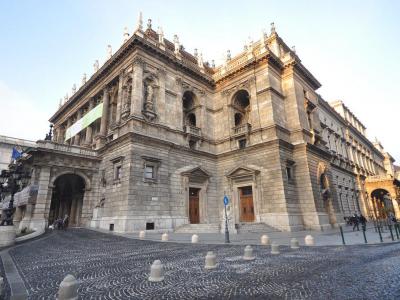 Set at the heart of Pest, on Andrassy Avenue, the Hungarian State Opera was officially opened to the public in 1884. Designed by Miklós Ybl, a key figure of 19th-century Hungarian architecture, this grand and elegant edifice represents a blend of Baroque, Renaissance and Revival styles and took nearly a decade to build, skillfully planted into the ensemble of affluent mansions nearby.

Although nowhere near the world's major concert halls in terms of size, the Hungarian Opera House is definitely one of the most beautiful. Flanking the building's main entrance, inside the niches, are the statues of Ferenc Erkel, author of the Hungarian National Anthem, and Ferenc Liszt, the most acclaimed Hungarian composer and reputedly one of the best pianists of his time. On the balustrade, surrounding the roof, are the 16 statues of Europe's greatest composers, such as Beethoven, Mozart, Verdi, Bizet, Puccini and Tchaikovsky. On the inside, the building is just as grand as it is on the outside, replete with marble columns and staircases, vaulted ceilings and lavish gold plating, complete with a rich chandelier weighing several tons(!), and ornate frescoes depicting scenes from the Greek mythology, not to mention the wealth of finest oil paintings and sculptures to be found in Budapest added to the decoration.

The acoustics here are said to be among the best in the world, ranked #3 in Europe after La Scala in Milan and Palais Garnier in Paris.

If you can't get a ticket or if opera isn't one of your things yet, consider taking a guided tour, run three times a day, to get a sense of what the high-society life in Budapest was like back in its heyday in the late 19th century. The tour will take you to the private balconies, smoking room, royal private staircase, and the bar area lavishly clad in crystal and Croatian marble.

Otherwise, if you're an opera fan, try to book yourself a ticket – if lucky, you just might succeed. The tickets are surprisingly not as pricey as you may think, but still, be prepared to dress up to the nines as it is a rather glamorous affair, after all.

Tip:
Combine with the nearby Mai Manó House of Photography, if only to have a look at the building from the outside.

Editor's note:
The building is being renovated until 2020, therefore Opera House performances temporarily take place at the Erkel Theatre. However, the Opera Shop and certain parts of the building can be visited even during renovation.
Image by Jorge Láscar on Flickr under Creative Commons License.