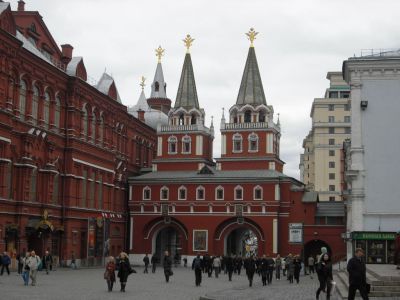 The very first stone gate on this site, initially called the Neglinensky gate, was built in 1535. In 1669 it was rebuilt and housed the Panaghia Portaitissa ("keeper of the gate") Icon, an exact replica of the Iberian Holy Mother of God Icon well-known for its miraculous abilities, brought from Athos in 1648.

To protect the icon from weather elements, it was placed in a chapel built in front of the gate, facing away from Red Square, in 1680. Subsequently, the name Iversky ("Iberian") stuck to both, the chapel and the gate. Another icon – of the Resurrection – was placed on the gate facing Red Square and gave it the second name.

A popular custom prescribed anyone walking to Red Square or the Kremlin to kiss the Iberian icon prior to entering the gate, and for men to remove their hats. The cramped temple was always filled with worshipers: beggars and outlaws could be seen praying alongside the highest royalty and the Tsar himself.

After the Revolution, the chapel was repeatedly robbed and stripped of all its valuables through confiscation, including the revered Iberian icon. In 1931, the Soviets decided to clear space for the passage of heavy machinery during annual military parades, and the gate and the chapel were demolished.

Following the fall of the Soviet Union, both structures were rebuilt in 1994-1995, and a new copy of the Iveron Theotokos Icon was purposely painted on Mount Athos. This new image has already become famous for many miracles of its own.

Over the years, the chapel appeared in a number of works by Leo Tolstoy, Ivan Bunin, Marina Tsvetayeva, and H.G. Wells. Just in front of it is a bronze plaque marking kilometer zero of the Russian road network.
Image by Stoljaroff on Wikimedia under Creative Commons License.