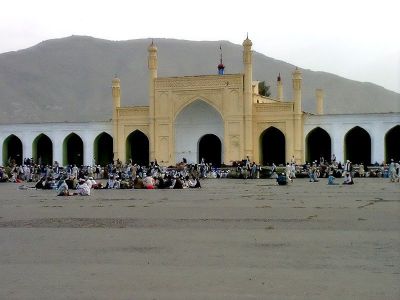 Located in one of the wealthiest areas of Kabul, Id Gah Mosque is the second largest mosque in the city. ‘Id Gah’ is translated as ‘prayer ground’. This mosque has hosted many religious ceremonies and festivals attended by Kings and Amirs. The historic announcement of Afghanistan’s independence was made here, in 1919. Mughal ruler Babur ordered the construction of Id Gah Mosque and had Persian architects build it with precious stone from the provinces Punjab and Sindh. The mosque’s architecture reflects the rich Muslim heritage. The building was painted in cream and white colors. It has four minarets at the front and four in the back, and one smaller minaret in the center of the roof, and many archways along the building. One feature that is more unique to the architecture of this mosque is its very long and narrow layout. There is a vast courtyard in front of the mosque, the Eid Gah Square, where a great number of Islam followers gather during the prayer season.
Image Courtesy of Wikimedia and KevinScottNL.
Sight description based on Wikipedia.