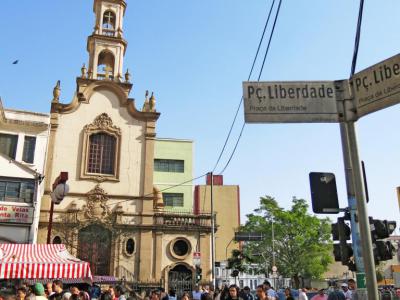 Igreja Santa Cruz das Almas dos Enforcados (Church of The Holy Cross of the Souls of the Hanged), Sao Paulo

The locals who watched the execution begged for mercy, which was not given. The twice-broken gallows rope seemed to speak of a divine sign of das Chagas's innocence. Local Catholics installed the cross as a tribute to das Chagas.

In 1887, the Holy Cross of the Hanging Church was built. The church was renovated in 1958, and the tower was added. The interior features an ornately painted nave, gilded accents, and a stunning chandelier.
Image Courtesy of Flickr and Adriano Makoto Suzuki.