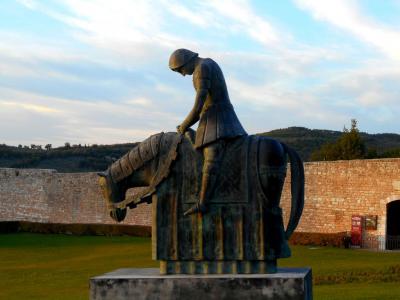 The Il Ritorno di Francesco ("The Return of Francis") sculpture is a modern-styled equestrian statue of Saint Francis of Assisi. Created by the Italian artist Norberto Proietti in 2005, it stands outside the Basilica of St. Francis of Assisi. The inscription on the bronze plaque features quote from the Leggenda dei tre compagni (Legend of the Three Companions) describing a pivotal moment in the life of Francis:

– Lord, what do you want me to do?
– Go back to your city and you will be told what you must do.
At the break of day, Francis, with his reformed inner self, desired only to conform to the will of God.

During his lifetime Francis had many dreams. One of them prompted him to become a knight and join the papal army. Pursuant to that vision, Francis bought armor and a horse, and embarked on a voyage to Rome.

At some point along the way, he stopped for a night in Spoleto where he had another dream in which God spoke to him and asked what he was doing. He told Francis of the need to serve God and not the army.

Needless to say, the would-be knight feared the prospect of riding back to Assisi where he might face the family's scorn for cowardice, leaving the army and evading the dangers of battles. One can easily read the emotions of an idealistic youth – his hopes and dreams shattered. The statue depicts the future saint in a humble state, predating his becoming a monk – slumped down in his saddle with his head and shoulders drooping, and his low spirits well echoed in the horse.
Image Courtesy of Flickr and Carlo Raso.