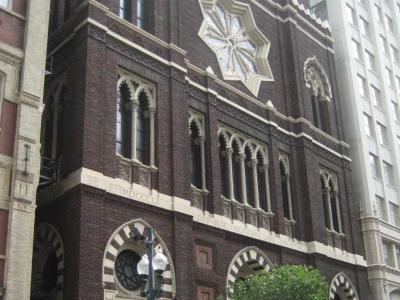 Immaculate Conception church, locally known as Jesuit church, is a Roman Catholic church in the Central Business District of New Orleans. The original church was built on this site in 1857. Immaculate Conception church was built and designed in the Neo-Venetian Gothic style of Gothic Revival architecture, with Moorish Revival and Byzantine Revival elements.

Two Immaculate Conception churches, nearly identical to each other, were built on the same site over time. The first church was designed by Fr. John Cambiaso, S.J., and completed in 1857. In the late 1920s, it suffered foundation damage due to the construction of the Pere Marquette building. The church's floor split in half. The building was disassembled in 1928. New footings at the same site were laid in 1929 with the cornerstone laid on 16 May 1929. The new church building, incorporating many fixtures from the older church, was dedicated on 2 March 1930.

Somewhat hidden among the surrounding high rises, the church is well worth a visit for its amazing stained glass and stunning interior. The statues, frescoes, and altars are simply beautiful.
Image Courtesy of Wikimedia and Infrogmation of New Orleans.
Sight description based on Wikipedia.