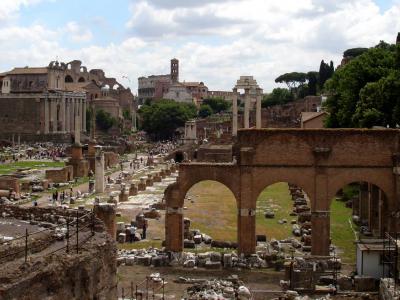 For lovers of Latin history and culture, the Imperial Fora – center of politics, religion and economy of the ancient Roman Empire – is just the right place to visit. This site comprises a number of monumental squares built in Rome over the course of one and half centuries, between 46 BC and 113 AD. The first square is the one created as an extension to the Roman Forum under Julius Caesar and features the Temple of Venus. It was a popular public square and, just before Caesar’s murder, the Senate had agreed to move here. The second square, featuring the temple of Mars the Avenger, was built under Emperor Augustus. According to a myth, the city of Rome was born, through Romulus, by the will of god Mars.

The biggest and greatest of all the monumental public squares was that of Trajan, built in 112 AD to commemorate the Roman victory over the Dacians. This is where the Basilica Ulpia was erected and also the large Temple of Trajan, built after the Roman emperor’s death.

During the 1930s, Mussolini restored the Imperial Fora in an effort to evoke and emulate the past glories of Ancient Rome. He also built Via dei Fori Imperiali which crosses through the site, supposedly in a bid to make the Colosseum visible from his office window.

Why You Should Visit:
Lined with remnants of the once magnificent ancient buildings, the last few years the avenue has been made traffic-free, so walking on it, with just a little imagination, will give one a pretty good sense of Ancient Rome's grandeur and magnitude.
Image Courtesy of Wikimedia and Airin.