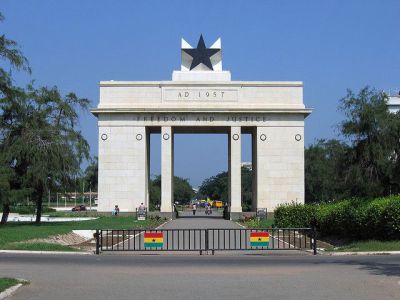 Independence Square (also known as "Black Star Square") is one of the most popular tourist attractions in Ghana. It was built in 1961 and it contains monuments to Ghana's independence struggle, including the Independence Arch, Black Star Gate, and the Liberation Day Monument. The Independence Square is the second largest City Square in the world after the Tiananmen Square in Beijing, China. With a capacity of about 30,000 people, the Black Star Square is a site for Ghana's Independence Day parades which falls on the 6th of March every year and for all major national public gatherings and national festivals.

As of 2011, the Independence Arch is guarded by several soldiers who prohibit people of taking close up pictures of the Arch and asking visitors for official permission, but you are free to take pictures of the area. There is also a fascinating view of the Guinea Gulf.
Image Courtesy of Flickr and Stig Nygaard.
Sight description based on Wikipedia.

Want to visit this sight? Check out these Self-Guided Walking Tours in Accra. Alternatively, you can download the mobile app "GPSmyCity: Walks in 1K+ Cities" from iTunes App Store or Google Play. The app turns your mobile device to a personal tour guide and it works offline, so no data plan is needed when traveling abroad.

Accra, the capital of Ghana, sitting on the Gulf of Guinea coast in West Africa, is a charming city renowned for its golden sand beaches and bustling nightlife. Wandering along its coastline, enjoying the Atlantic breeze, you will find alongside many entertainment venues a number of historic sites as well. The most prominent of them, undoubtedly, is the Kwame Nkrumah Memorial Park commemorating...  view more