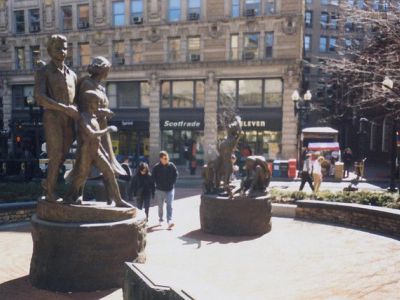 Drifting along the Boston Freedom Trail you will come across a small park where you find the Irish Famine Memorial. It comprises two sets of statues, one of a mother, father and son obviously weak and ill, in attitudes of despair and supplication; and the second is of (perhaps) the same family – well-dressed, well-fed and wearing hopeful expressions. Eight plaques around the statues tell the sad story of how this memorial came to be erected in 1998.

In 1845 a series of catastrophes in Ireland led to a five year period of famine, poverty and disease. It began with the failure of potato crops, which were the main source of income and food for many Irish families. The English Administrators did little or nothing to help the people and food became perilously scarce. As more and more families succumbed to mal-nutrition, disease began to spread. Hunger and sickness killed over a million people and over 2 million fled the country, most of them crossing the Atlantic and arriving in America.

About 200,000 Irish refugees settled in Boston, living in appalling conditions of poverty in the insalubrious waterfront area of Boston’s North End. Luckily, the Irish are optimistic folk, and their will to live and to make a better life for their children paid off and they began to prosper. As Boston is considered the Irish capital of America, it is only fitting that such a memorial should be raised here to remind future generations that nothing is gained without a struggle.
Image by Digital Sextant on Flickr under Creative Commons License.