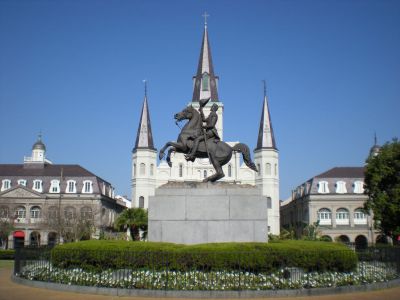 Jackson Square, originally known as the Place d’Armes or Plaza de Armas, is a major and important cultural attraction in New Orleans. Because of its proximity to the Mississippi River, Saint Louis Cathedral, and the Cabildo, it was and is a popular meeting spot. Architect and landscape architect Louis H. Pilié designed the plaza in 1721. The square received its current name in 1850.

The square was named after President Andrew Jackson. President Jackson was a hero of the War of 1812 and a statue of him on horseback is in the center of the square. The statue is one of four identical statues in the United States. The square was a hubbub of activity in colonial times and is where the militia performed drills, vendors sold their wares at the open-air market, and public hangings and beheadings occurred.

No longer the site of hangings or beheadings, today’s visitors can have their portrait or caricature drawn by an artist or be entertained by the colorful dancers, mimes, clowns, or singers. In addition, they can buy the works of the many artists who line the walkways. The site has been the location of many movies, festive events, television shows, and is a favorite destination for locals and visitors alike.

Why You Should Visit:
The view of Jackson Square is fairly iconic, featuring Jackson's statue at its center and the beautifully designed St Louis Cathedral as its backdrop, but there's always more to appreciate than the view.
Art festivals, music festivals, street performers... you never know what you'll find here. Good for some great tourist photos, a quick break on the chairs, and really a great place to take it all in.
You'll see so much of New Orleans from just this little spot that it's kind of amazing. And if nothing else, it's free to go to.

Tip:
Go by 2:00 pm to get the full effect: otherwise, the area dies down... until dinner.
Also, remember to walk up the steps and watch the boats go by on the Mississippi.
Image by Sami99tr on Wikimedia under Creative Commons License.
Sight description based on wikipedia

If you are looking to learn about the heritage sites of New Orleans you might want to take this tour. Widely known for its variety of unique architectural styles, the city has lots of fine examples of buildings in the Greek Revival, the American Colonial and the Victorian styles. Check out the tour suggested below for an orientation.

New Orleans has some of the oldest and the most beautiful churches in Louisiana. Some of them, like St Louis Cathedral, have become iconic symbols of the city, others are considered to be "fresh air" to the busy business quarters. The churches here combine different architectural styles. The tour below includes some exquisite examples of places of worship in New Orleans.

Sick and tired of big malls that are pretty much the same everywhere? New Orleans has a few shops to surprise you with. Whether you are looking for some interesting or weird souvenir to bring home to your friends or whether you would like to have a piece of New Orleans for yourself, the following tour will take you to the right places to find it.