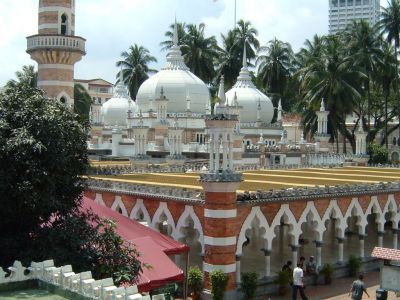 Within the urban skyscrapers, tucked amidst the serene landscape of palm trees is the beautiful Masjid Jamek. Located at the point where the two rivers, Sungei Klang and the Sungei Gombak meet, the Masjid provides an ambiance of tranquility and quiet in the heart of Kuala Lumpur.

Thronged with worshippers on Fridays and with tourists the rest of the days, the Masjid Jamek is a sight one cannot afford to miss in Kuala Lumpur. In its white and brick red appearance with its old school architecture, the Masjid looks quite distinct in the concrete mechanized surrounding. Designed by Arthur Benison Hubback, this building too draws inspiration from the architectural blend that swept the Indian sub-continent.

Built in the early years of the 20th century, the Masjid was inaugurated by the Sultan of Selangor in 1907. For over a century now the Masjid has been the central point for city. For a long time, the Masjid Jamek was the main mosque of Kuala Lumpur. This title was later transferred to the National Mosque that came into existence in 1965. Apart from being the oldest mosque in the city, the Masjid is also the point from where the city of Kuala Lumpur came into being. The Mosque was built at the very site where the early settlers are believed to have settled.
Image by Earth on Wikimedia under Creative Commons License.