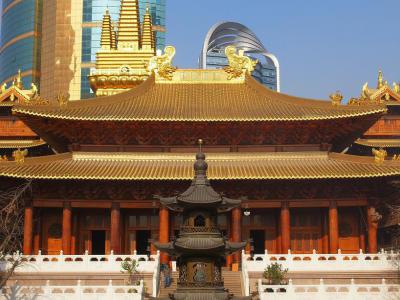 Translated literally as the “Temple of Peace and Tranquility”, the Jing'an Temple of Shanghai is a Buddhist shrine located on the West Nanjing Road within the district bearing the same name - Jing'an.

First built in 247 AD during the Three Kingdoms period of ancient China, the temple was originally set beside the Suzhou Creek in the Wu Kingdom, but then moved to its present location in 1216 under the Song Dynasty. During the Qing Dynasty it was rebuilt and, during the Cultural Revolution period, it housed a plastic factory. In 1983, the temple returned to its original service as a house of worship, upon which it was renovated and had the Jing'An Pagoda added in 2010.

Today, the temple comprises six halls including the main Mahavira Hall (the "Precious Hall of the Great Hero"), the Guanyin Hall, the Jade Buddha Hall, and three Southern-style halls, namely: the Hall of Heavenly Kings, the Hall of the Three Saints, and the Hall of Virtuous Works, each with its own courtyard. The latter three halls were added as part of the reconstruction of 1880.

Within the Guanyin Hall there is a statue of Guan Yin goddess – measuring 6.2 meters tall and weighing 5 tons – made of camphor wood, standing atop a lotus-shaped base. Opposite the Guanyin hall, inside the Jade Buddha Hall, there is a 3.8-meter statue of sitting jade Buddha placed in the center, the largest of its kind in China. Other notable features within the temple include the Ming Dynasty copper bell (Hongwu Bell), weighing 3.5 tons, stone Buddhas from the Southern and Northern Dynasties period (420-589 AD), and paintings by renowned artists, such as Chu Zhishan, Zhang Daqian and Wen Zhenming.