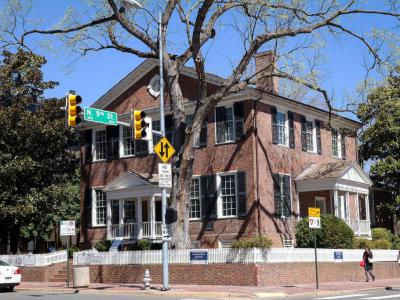 The John Marshall House is a historic house museum and National Historic Landmark in Richmond. It was the home of Chief Justice of the United States John Marshall, who was appointed to the court in 1801 by President John Adams and served for the rest of his life, writing such influential decisions as Marbury v. Madison (1803) and McCulloch v. Maryland (1819).

Built in 1790, the house was home to Marshall, his wife Mary Willis Ambler Marshall (known within the family as Polly), and their six children. Marshall lived at the house until his death in 1835.

The house is a Federal-style brick building featuring a dining room, parlor, and large parlor/dining room on the first floor and three bedchambers on the second. It was originally surrounded by an outbuildings including a law office, kitchen, laundry, and stables and sat on a full city block in Richmond's fashionable Court End residential neighborhood. Marshall's neighbors included the attorney John Wickham, who defended Aaron Burr in Burr's infamous treason trial.
Image by Smash the Iron Cage under Creative Commons License.
Sight description based on wikipedia