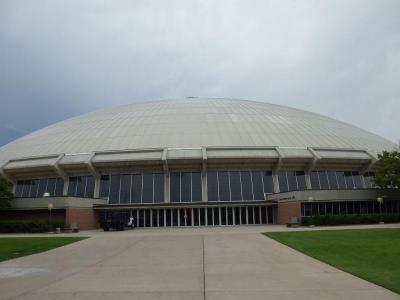 Jon M. Huntsman Center is a 15,000-seat, multi-purpose arena on the campus of the University of Utah. The arena opened in 1969 and is named after chemicals entrepreneur and philanthropist Jon M. Huntsman, father of Utah's former governor Jon Huntsman, Jr. From its opening until the completion of the Delta Center (now known as the Energy Solutions Arena) in 1991, it was Salt Lake City's premier sports and entertainment venue. Architecturally, it is known for its steel cloud, which hangs from the arena's silver dome interior. The steel cloud holds the arena's center court scoreboard, sound and lighting systems. The arena hosted the 1979 Final Four, featuring the first round of the rivalry between all-time greats Magic Johnson and Larry Bird. Magic's Michigan State team defeated Bird's then-unbeaten Indiana State in the final, which remains the most-watched college basketball game in history.
Image by Nisa' Haron on Flickr under Creative Commons License.
Sight description based on wikipedia