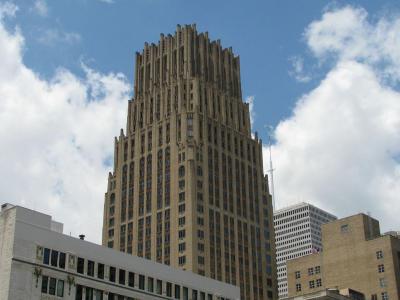 Listed in the National Register of Historic Places, the JPMorgan Chase Building (fka Gulf Building) is one of the preeminent Art Deco skyscrapers in the southwestern U.S. With a strikingly modern style and commanding height, it was the tallest building west of the Mississippi River at the time of its completion in 1929, having dominated the Houston skyline until 1963, when it was surpassed in height. The architects used a stepped profile design, which diminishes in volume as it rises.

There is a massive stained-glass window over the entrance on Travis Street that should not be missed, depicting the Battle of San Jacinto and quite impressive to see. The rest of the banking hall is equally interesting, particularly the fluted pilasters that define the walls, the ceiling with all its ornamental décor, an the artifacts displayed in an alcove nearby. Another feature to see is the Main Street lobby, richly decorated with eight frescoes illustrating the history of Texas and Houston, painted by New York artist Vincent Maragliotti, with vaulted ceilings, and with fixtures of decorative polished nickel and etched glass in panels of raised arches, scrolls, rays, and chevrons.

Located at the corner of Main Street and Rusk Avenue, in the downtown financial and petroleum business district now dominated by glass, aluminum, and concrete, the building remains a treasure of Houston's past. Both the banking hall and the lobby are open to the public during usual banking hours.
Image by Reagan Rothenberger on Wikimedia under Creative Commons License.