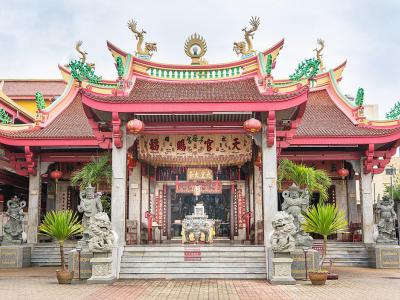 Located on Ranong road in Phuket, hidden behind all the food stalls is the colourful and spectacular 200 year old Jui Tui shrine, a temple of Put Jaw. The word ‘Jui’ refers to water while ‘Tui’ refers to mortar. The shrine was named so since the entrance has a wide canal with lots of water. Dedicated to the Goddess of Mercy, Kwum Im, this is the oldest Chinese Taoist temple in the town. The Chinese styled shrine has intricate detailing of Buddhist temples, ancient dragon motifs on bright wall banners and Chinese lanterns. The exterior appears to be like a headless and tailless turtle. The smell of the incense fills the air in the interiors which depict the Chinese gods.

The Shrine was built in 1911 with a thatched roof by the owner of the garden who gave the Kiew Ong Tai Tae. God Jee Jo, a medium asked the villagers to build the shrine. In 1982, many vegetarian participants joined hands in developing the shrine to give it present strength and beauty. The Sae Yid ( God’s Birthday) and the Vegetarian festival( celebrated in the 9th lunar month) are two annual events held by the Jui Tui temple. The shrine is the birthplace of the October Vegetarian Festival which is dedicated to the Vegetarian God, Kiu Wong In. This 9 day ritualistic festival is observed for bringing good fortune to the devout Buddhists.
Image Courtesy of Wikimedia and Surasit.khunsong.