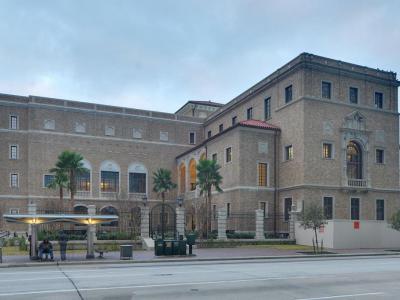 First opened in 1926, this stunning building – the original location for the Houston Public Library – has an urban legend as being haunted by the ghost of its former groundskeeper and that of Petey, his dog. In the evenings, Cramer, who lived in the basement, would go up to the third floor and play his violin, accompanied by the German Shepherd. In November of 1936, the 79-year-old was found dead by the librarians, and not much is known about the dog's ulterior fate.

Sitting right next to City Hall, the three-story Spanish-Renaissance style building has since been named after Julia Ideson, who served in her role as the city's first Head Librarian for forty years. Following a multi-million dollar restoration project, it currently houses the Metropolitan Research Center that holds a massive collection of millions of historic photographs, thousands of volumes of rare children's books, a 1520 edition of The Odyssey, and a 1615 edition of Don Quixote.

If you're looking for a repose downtown and actually enjoy reading, go to the second-floor reading room, or just climb to the third floor (now occupied by the Tudor Gallery) and check out the view, which has to be seen to be believed.
Image by Ed Uthman on Wikimedia under Creative Commons License.