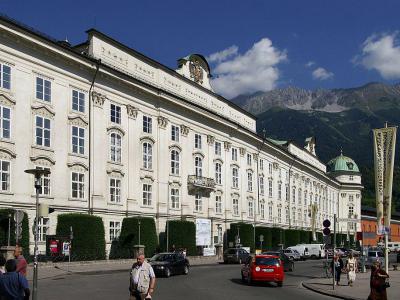 For a long time the Innsbruck Imperial Palace was the home of the ruling Habsburg dynasty in Austria. It rates among the Imperial Palace and the Schonbrumm Palace in Vienna as one of the three most important cultural edifices in the country.

It was formerly a residential compound of the Habsburgs. It still houses the Noblewomen's Collegiate Foundation, the Silver Chapel, the Court Church with the cenotaph of Maximilion, the Theological University, The Tyrolean Folk Art Museum, Innsbruck Cathedral, the Congress and the Court Garden.

The palace was initially constructed from bits of medieval fortifications by Archduke Sigismund in 1460. There were several major changes over the next 250 years. Empress Maria Theresia made Baroque alterations.

The main facade on the Street Rennweg was completed and the Giants' Hall received ceiling frescoes. The Imperial Chapel was built in the room where Francis I had died in 1765. In 1858 the last renovation of the Imperial apartments was completed. The renovations followed the Rococo style of the Schonbrumm Palace in Vienna.

The Imperial Palace contains, not only the extensive Imperial Apartments. It also holds the Gothic Hall. The hall was built in 1494. It is a five nave hall with a cross-groined vault. The area of the hall is 2,133 square feet.

The Palace Courtyard is paved with cobblestones. It has an area of 4,265 square feet. It has been called "the most beautiful inner courtyard in Innsbruck." Redone Baroque style, it features elements of pilaster, frames, cornices and cartouches. There are four portals accessing the courtyard.

The Imperial Palace has two chapels that can be used for services and events.
Image Courtesy of Wikimedia and böhringer friedrich.