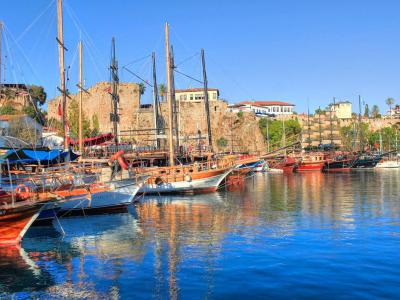 Kaleic (Old Antalya) is a small historic section at the center of the sprawling modern city. Until modern times, almost the entire city was confined within its walls. It has structures dating from the Roman, Byzantine, Seljuk, Ottoman and modern Turkish republican eras. Most of it however, dates to the late 18th and 19th centuries.

While some of the traditional Turkish homes are occupied by residents, many have been converted into boutique hotels, restaurants and shops selling handicrafts and other folkloric arts. The area has been undergoing to an extensive restoration by the municipality of Antalya.

The Kaleiçi area is located in the centre-eastern portion of the city along the mediterranean coast fronted by the yacht harbour that dates to the Roman era.

Today it is the touristic center of the city with its hotels, bars, clubs, restaurants, and shopping.

The name Kaleiçi means "Inside the Kale" or "Inner Kale" (Kale itself means castle or fortress).
Image Courtesy of Flickr and Omer Unlu.
Sight description based on Wikipedia.

Want to visit this sight? Check out these Self-Guided Walking Tours in Antalya. Alternatively, you can download the mobile app "GPSmyCity: Walks in 1K+ Cities" from iTunes App Store or Google Play. The app turns your mobile device to a personal tour guide and it works offline, so no data plan is needed when traveling abroad.

Shopping in Antalya can be both a peaceful therapy session or an exhilarating adrenaline rush, depending on where you go. Either way, it is quite enjoyable, given an amazing range of retail offerings, which, apart from a few striking photo opportunities, provide setting for an ideal shopaholic's paradise.

Some of the best shopping in town is found in the old district of Kaleiçi replete...  view more

A gateway to Turkey's southern Mediterranean, Antalya was founded circa 150 BC by Hellenic King Attalus II of Pergamon, and was named Attaleia or Attalia in his honor. Today, this name is still used in Greek, whereas in Turkish it has evolved as Adalia and eventually Antalya.

Throughout its history, the city changed hands several times. Not long after its foundation – in 133 BC – it...  view more

Visitors will always find many things to see and do in Kaleiçi or Old Town Antalya. Among the most visited are Hidirlik Tower, Hadrian's Gate, Clock Tower, Yivli Minare Mosque, Club Ally and much more. This is a historic area you must visit during your journey to Antalya. Among the above mentioned attractions you will see nice little houses, beautiful narrow and large streets. This is a list...  view more