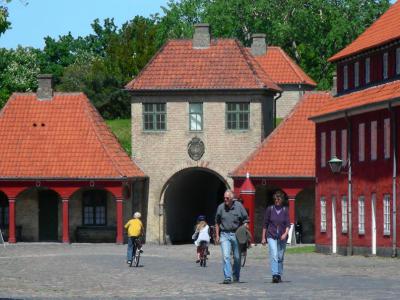 One of the most impressive and well-preserved fortifications in Northern Europe, Kastellet, as it is called, has bastions at the corners and is designed in the form of a pentagram. As you enter its grounds, you will find a number of buildings including a windmill and a church. This historic site which also serves as a public park is frequented by locals and tourists alike.

It was in 1626 that King Christian IV started construction of Kastellet. Economic constraints forced him to drop his grand plans of building a large castle here. King Frederik III, his successor continued with the construction which was later extended by Henrik Ruse, the Dutch engineer after the Swedish siege between 1658 and 1660.

Kastellet was built as an effort by Copenhagen to defend itself against England in the 1807 Battle of Copenhagen. A.P. Moller and Chastine McKinney Mollers General Fund made possible a complete renovation of Kastellet between 1989 and 1999. Currently, it is owned by the Danish Defence Ministry and the area is used by Defence Intelligence, Danish Home Guard, Chief of Staff, Royal Garrison’s Library and the Defence Judge Advocate Corps.

Locals visit Kastellet to enjoy a pleasant walk on a sunny day. Tourists visit this fortification for its rich heritage and children love to play around with the birds and animals here.

Why You Should Visit:
The high walls of the fortress offer a lovely view of the harbor, and the fact that half of it is still a working base means it's kept in tip top shape.
Very pleasant area to take a quiet stroll or run, and with a charming windmill to boot!

Tip:
Can get windy on a cold day so do cover up.