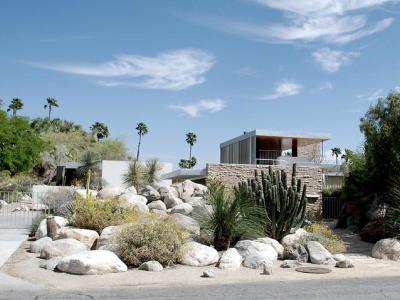 Owning the most famous house in the world – the Fallingwater – was not enough for department store magnate Edgar J. Kaufmann: he needed a winter residence and he needed it in Palm Springs. In 1946, Kaufmann chose architect Richard Neutra – revered in his time as a pillar of American Modernism – to build a luxurious Desert House that would also function as an "efficient machine". The result was, arguably, Neutra's most famous design. Soon after its completion in 1949, for what was then considered astronomical $300,000, the sleek forms and mechanical imagery of this building became an emblem of high Modernist style in the US.

The five-bedroom, six-bathroom vacation house was designed to provide a seamless connection to the surrounding desert landscape, simultaneously offering shelter from the harsh climatic conditions. Large sliding glass walls bring the desert practically indoors, while the major outdoor rooms are enclosed by a row of movable vertical fins that offer flexible protection against sandstorms and intense heat. After Kaufmann's death in 1955, the house had a series of owners, including singer Barry Manilow.

Today, many critics place the Kaufmann House among the most important buildings of the 20th century in the United States, along with the likes of the Fallingwater, Robie House, Gropius House, and the Gamble House. Interestingly, despite its location in Palm Springs, this property was also included in an expert-reviewed list of all-time top 10 houses in Los Angeles, too.
Image Courtesy of Flickr and Joe Wolf.

Since the early 1930s, Palm Springs has been a favorite desert oasis for the Hollywood elite. With its excellent winter and springtime weather, fabulous shopping, and beautiful overall ambiance, this place offered celebrities a convenient escape from clamoring photographers and newspaper gossips. Behind the private walls of homes, bungalows, and hotels – or sometimes even in the city's...  view more