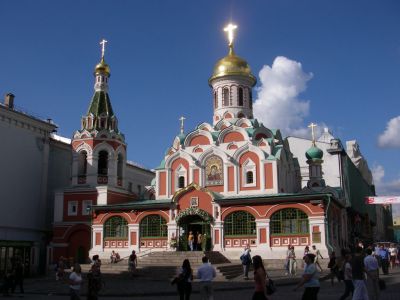 Formally known as the Cathedral of Our Lady of Kazan, this Russian Orthodox temple is largely regarded to be one of the most important churches in Moscow. Among other things, it is famous for being home to the Kazan Icon, symbol of the Virgin Mary – the guardian and patroness of the city of Kazan, which is reported to possess supernatural properties.

The original wooden church on the site was built by Prince Dmitry Pozharsky in the late 1610s-early 1620s to celebrate victory over the Polish–Lithuanian Commonwealth and the liberation of Moscow in 1612. The prince financed the construction from his own funds in gratitude for the divine help from the icon, to which he had prayed on several occasions. For years afterwards, the cathedral had been the scene of annual celebrations with a solemn parade led by the Patriarch and the Tsar of Russia carrying a processional cross from the Kremlin. During the Napoleonic invasion, the Kazan Icon once again was heavily prayed to for the safe delivery of Moscow.

After the wooden shrine was destroyed by fire in 1632, Tsar Michael I ordered its replacement with a brick church. In the late 17th century, the church was expanded with a bell tower and a redesigned entrance. Numerous other additions followed over the 1800s, seeing much of the original design lost.

Under the Soviet rule, briefly – from 1929 to 1932 – the building served as the Museum of the History of Religion and Atheism. It was finally demolished by the Bolsheviks in 1936. What we see today is a replica reconstructed in 1993.

Why You Should Visit:
Nice at night, as well as during daytime for a photo shoot. Also worth going in for a little while to enjoy listening to the Russian Orthodox chant. The entire service, except for the sermon, is sung.
Inside, you will find a small but highly decorative interior with iconic images and other items associated with the Russian Orthodox faith.